Here are the actors that have been cast for Kylie’s new show Get Christie Love so far.

The new Get Christie Love, written by Kemp and directed by Stephen Williams, is an action-packed, music-driven drama that centers on Christie Love (Bunbury), an African American female CIA agent who leads an elite ops unit. She transforms into whomever she needs to be to get the job done, especially when it’s down to the wire and the stakes are life and death. The high-adrenaline missions of the series are anchored by an emotional mystery about Christie’s first love — unearthing the truth about this relationship will be the biggest mission impossible of her life.

Khandi Alexander
Alexander will play Sarah, a veteran intelligence agent and head of Christie’s unit. She was a badass back in her day and can summon those skills again when need be.

Lisseth Chavez
Chavez will portray Val. One of the youngest team members, Val is the reality TV-obsessed tech op for Christie’s counter-intelligence field unit. Brilliant, sardonic and quick-thinking, she gets the team in anywhere and everywhere.

Dennis Oh
Oh will play Sang. Not only is Sang a member of Christie’s counter-intelligence unit, he’s Christie’s lover as well. Although they appear to be a happy couple, Sang wants a real relationship while Christie is hesitant. Caring and ambitious, he wants to be the first Asian-American head of the CIA.

Steven Weber
Weber will play Steve, Christie’s law school teacher a decade ago, and now serves as her mentor and day-to-day confidant. He is a father-figure to Christie. 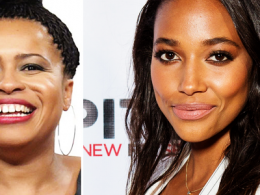 ‘Get Christie Love’: Kylie To Star In ABC Reboot From Courtney...