During the second day of ABC’s Virtu-Fall Presentations, Big Sky executive producer and showrunner David E. Kelley said there’s no secret to creating a successful TV show. For the notable Big Little Lies creator helming a hit title can be quite simple.

“It’s very unscientific and inexact. I don’t consider myself a uber-producer or a television maven,” Kelley said during Wednesday’s Big Sky panel.  “If I find something I like then, I just cross my fingers, close my eyes and hope there’s enough ppl out there that will find it interesting.”

The showrunner, joined by cast members including Katheryn Winnick, Kylie Bunbury and Ryan Phillippe, teased what thriller enthusiasts can expect in the new ABC series, which will debut Nov 17. 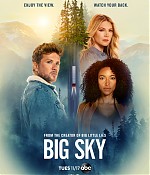 The new ABC series, which stars Katheryn Winnick, Kylie Bunbury and Ryan Phillippe, sees private detectives Cassie Dewell and Cody Hoyt team with ex-cop Jenny Hoyt to search for two sisters mysteriously kidnapped by a truck driver in Montana. Upon learning that the kidnapping isn’t an isolated incident, the law officials must race against the clock to prevent any more abductions.

During the discussion Kelley and the Big Sky stars touted the new show’s ability to provide viewers with a dose of escapism, while not shying away from grander topics that find relevance today. While the show may take place in a small Montana town, Bunbury said she’s glad that the show does not side-step undeniable issues including race and even COVID-19.

Winnick, who stars as one of the law officials searching for the missing girls, said that Big Sky’s focus on powerful women can also find significance among viewers. However, young ladies and women seeking to find inspiration and empowerment aren’t the only viewers who can enjoy the series, Winnick said. Men and thriller lovers can also look forward to an engaging story in Big Sky, she added.

When asked about fronting empowered women in his television hits, Kelley said that it’s not as difficult as others make it seem.

Ross Fineman, Matthew Gross, Paul McGuigan and C.J. Box serve as executive producers and with by A+E Studios in association with 20th Century Fox Television which produces the series. 20th Television is a part of Disney Television Studios, alongside ABC Signature and Touchstone Television.