ABC posted the press release for 1.09 Let It Be Him in addition to some HQ stills. Check them out in the photo archive. 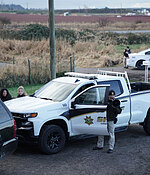 “Let It Be Him” – In an action-packed episode, while knocking on doors and searching for clues, Cassie unexpectedly comes face-to-face with Ronald, which puts her in danger and triggers her memory from the pair’s prior meeting. Elsewhere, not feeling like she can trust her husband, Merilee makes a life-changing decision that puts both her and Rick’s fates into her own hands on an all-new episode of “Big Sky,” TUESDAY, FEB. 16 (10:00-11:00 p.m. EST), on ABC. Episodes can also be viewed the next day on demand and on Hulu.

Guest starring in “Let It Be Him” are Patrick Gallagher as Sherriff Tubb, Brooke Smith as Merrilee Legarski and Sharon Taylor as Elena Sosa.

“Let It Be Him” was written by Jonathan Shapiro and directed by Michael Goi.