The second season of the CBS All Access anthology reboot of The Twilight Zone has added a robust list of cast members that will travel through another dimension…a dimension not only of sight and sound but of mind. A dimension called The Twilight Zone.

Some highlights for the newly announced slate of actors include the episode titled “Ovation” which is directed by Ana Lily Amirpour (A Girl Walks Home Alone at Night) and written by Emily C. Chang and Sara Amini. The episode is stacked with Ferreira, Smollett-Bell as well as Tawny Newsome (Space Force, Lower Decks), Paul F. Tompkins (BoJack Horseman, Comedy Bang! Bang!) and Thomas Lennon.

Jordan Peele and Simon Kinberg are executive producers of The Twilight Zone.

The season two cast and episode titles, in no particular order, include:

Previously announced cast and episodes include:

Episode: “The Who of You”
Starring Ethan Embry (Grace and Frankie, Blindspotting), Daniel Sunjata (Graceland, Rescue Me), and Billy Porter (Pose, Like a Boss)
Written by Win Rosenfeld
Directed by Peter Atencio 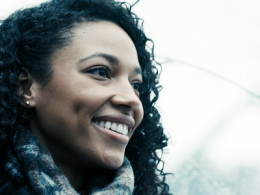